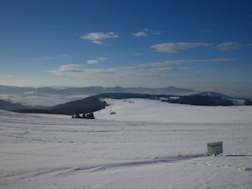 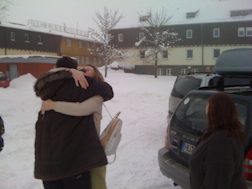 On Friday 5th February me and Cerri made our way to Heathrow airport to catch a plane to Frankfurt. We were on our way to a weekend event organised by German members of the Order of Bards Ovates and Druids. I’d been cornered by one of these members, Petra, at the Order’s Summer Gathering last year and we talked about how she could get to me Germany to play a concert there. As time past the concert turned into a weekend gathering with workshops, and a dawn Imbolc ceremony.

Me and Cerri had been asked to run one of the workshops and the Imbolc ritual, and I was to play a concert on the Saturday evening. It had apparently been snowing in the mountains. We know what snow is. I mean, we’ve had loads of the stuff this Winter haven’t we?The flight over took less time than the car journey to the airport, so soon we were collecting our baggage (not my guitar –British Airways understand the connection between a musician and their instrument, so they always allow me to take my guitar on the plane with me), and we were met by Petra at the airport. From there we were taken directly to the mountain lodge where the gathering would take place. 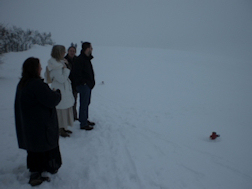 Now, yes, we have had snow here in the UK, and there has been quite a lot of it too, but when I saw how much we were heading into I had to smile. It was the most beautiful Winter wonderland – Nature at her most artistic, everywhere I looked there were snow-drenched trees, icicles, drifts of the purest white. Petra said that they’d had more snow than normal, but I think if we’d had snow like that in the UK, there’d be riots over bread and milk in the supermarkets, we’d all lock our doors and stay inside thinking that The Day After Tomorrow film had come true. But the German’s in this part of the country are used to it. They change their tyres for Winter tyres, and there is evidence of snow-control everywhere. Most roads are cleared by an army of gritters and snow-ploughs, and they even have helicopters out spraying de-icer from the skies!

In the evening we were treated to a meal in a beautiful 15th century building in a lovely little German town nearby. When I’m travelling I always love to try the local food. When I’m abroad I don’t want fish and chips! I also found that there was a ‘Traditional Hippiefest’ here, how groovy!

The next morning people began to arrive and it was so good to finally meet people I’d communicated with via email, in person. The venue was perfect, a lovely circular workshop room, and a great hall for the concert. Mine and Cerri’s workshop began with me asking if there was anyone present who had never written a poem. A few hands went up. I then said that, after this workshop they’ll never be able to say that again. People are always sceptical when I say that, but sure enough, by the end of a workshop with 40 people, 80 amazing poems had been written.

Now usually we do this workshop in English, but today we we had Petra to translate, and the poetry was be written in German. As the groups were sharing their creations, although I couldn’t understand what was being said, you could tell that the magic had worked. That was me done until the evening. So after lunch we took the opportunity to search for a suitable place for the dawn Imbolc ceremony. 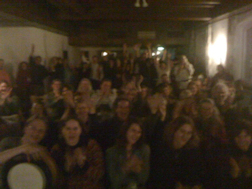 This proved harder than I thought as the snow was so thick we were up to our knees in most places. But finally we found a place. As I looked around me, there was no horizon, it was very disorientating. The posts in the photo are 2 metres high, and you can see the top of a sign too, and notice the lack of horizon.

A suitable place found, we returned and chilled for the rest of the afternoon while Volkert Volkman did his workshop. Later his band arrived – they were opening the evening with harp and story. There were 40 people for the workshops and 70 for the evening concert. Volkert’s group were brilliant. Once more, being a lazy Englishman when it comes to learning other languages, I couldn’t understand the words, but the four harpers backing the storyteller once more showed me the wonders of the modern Bardic tradition. With no break after them, I was quickly on and playing.

It will never cease to amaze and excite me when I travel to a foreign country and find audiences there that know my songs, and will fully engage and sing along. The audience were amazing, and it took no time at all for us to get that important raport, and have some real fun together. It was also great to meet people I’d conversed with through Twitter and Facebook, particularly an amazing Bodhran player called Rudiger who I felt I’d known for years. My first concert in Germany was a great night I won’t ever forget. 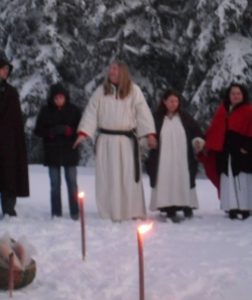 During my second set I played Imramma (A Soul Quest), not a song I usually play but one that will enter my live sets for 2010. One of Volkert’s harpers, Jonny Robels, suddenly joined my on stage. He’d never heard the song before and was in the wrong tuning which made the first part of the song a little challenging, but once that had been sorted out he improvised with me, and to my ears it sounded beautiful. A ‘moment’.

He is an amazing wire-strung harper who built his own harp. We spoke after my set and now he’s going to make one for me! I have two lovely harps, a nylon string and a gut string, and I’m really looking forward to playing the wire harp.

After my set there was an open floor where people jammed together and music was played until 4am. I know this because although me and Cerri left the concert hall around 1.30 (to get some sleep before the dawn ritual) our room was directly above the music. That might bug some people, but even at our camps we have no music curfew, and I loved drifting off to sleep to the sound of singing and laughter.

6.30 arrived very quickly. It was dark and cold, and as I woke up I once more wondered about my sanity. I wasn’t alone in this – a number of people kept asking why it had to be at dawn… We made our way to the location, and all of those thoughts fell away. The day before, when we had found this space we had seen only a wall of white. Today that mist had cleared and we saw what had been hidden from us. Nature’s special effects department were working early and we were blessed by waves of mist in the valley between majestic mountains, and then the most glorious Sunrise I think I’ve ever seen. 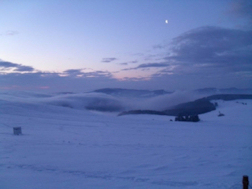 We invoked the triple aspects of Brighid and each person stepped forward and made their vow, their commitment to something that they would achieve this year. We then toasted these words with bread and drink, offering some to the Earth. The red drink on the pure, white snow was very evocative.

The weekend was over far too quickly, and soon we were on our way back to the UK. New friends made, memories to treasure. When OBOD members get together like this they create such incredibly special moments and energy. A blessing indeed.